I was interviewed by the associate editor of World Future Review about hopes and observations of the future based on my recent book "Stress Testing The USA". The  interview is available online. Here is a small sample.

Challenging the System: An Interview with John Rennie Short

WFR: The United States has seen its share of crises over the last few years, and the question that many futurists would probably ask is “How much better prepared is this country for the next crisis?” It sounds like you have some doubts about U.S. crisis preparedness as it now stands. And you express those doubts in your book.
John Rennie Short: What I did in the book was to look at the whole range of events— four in particular, namely, the Iraq war, Hurricane Katrina, the financial crisis, and Hurricane Sandy. In a sense, I wanted to shift the debate toward looking at systemic failures and away from blaming any one particular individual or group. Often we’ll look for one person to blame—“the botched Hurricane Katrina response was Michael Brown’s fault,” for example, or “the Wall Street meltdown happened because of greedy bankers.”
I tried to show that there were structural issues at work.If we say it was just greedy bankers, well, there are always greedy bankers. What changes can we make to the larger system?
We should be more open to dissident voices—such as the voices that were warning us about the housing bubble, or the voices warning us against invading Iraq. Also, we tend to look at the future as simply an unfolding of the past. At this moment, however, that is actually a particularly dangerous notion to hold.
Take the notion of climate change as an example: all of our thinking and all of our infrastructure is based on the weather patterns that we have known for the last few hundred years. Those were patterns in which we could expect a once-every-five-hundred-years “super storm,” or maybe a one-in-a-hundred-years super storm. But under climate change conditions, the probabilities of a super storm vastly increase. So that one-in-a-hundred-years super storm becomes a one-every-ten-years super storm! The reality is changing, but our infra- structures and thinking stay woefully behind.

WFR: Those “super storms” are one of the near- future threats that you warn readers about in your book. What would such as storm entail? Certainly Hurricanes Katrina and Sandy seemed pretty “super” in themselves.
Short: We have a scale of hurricanes, something like 1 to 5, and 5 is very, very high. And we tend to get very few of those, maybe one in a hundred years. And climate scientists are saying there are just more and more of these storms that are reaching that scale of intensity. The storm that would have hit us once in a hundred years is now more likely to hit us once every ten years.
And so the probabilities are changing very, very quickly. And we should always be wary when trying to predict these things. I think climate and weather are very unpredictable. That’s why I’ll tend to speak in probabilities. We had Hurricane Katrina in 2005, and it wasn’t followed by other major storms. The years that immediately followed weren’t really active years. But then just last year (2012), we had Hurricane Sandy. It doesn’t follow a straight line. There isn’t a set pattern. But the risk is real nevertheless. And what it demonstrates is that you need to change the metric of risk.
The same applies with fiscal risk. Clearly, there is growing systematic risk in the financial system. And at the same time that we have all of this increasing risk, we also have these sets of beliefs against regulating the market. We’re still implementing the ideology of deregulation, and we’re doing so at the very time when all of these risks are going up.
Just as the world is becoming more uncertain, people more than ever want the warmth of certainty. “Deregulation, that’s good”; “build up the military, that’s good.” They hold onto these simplistic notions from the past and apply them to the future, just as the future is becoming more unpredictable.

WFR: The dysfunctional polarization of Congress and the Obama administration surely isn’t very amenable to crisis preparations of any kind. How feasible is it to enact the changes that you call for in this current political climate? And how might that political climate itself change (or not change) in years to come?
Short: We are in a particular period, one that comes along every generation or so, when there’s a major time of change and the policies of the past just don’t work. Another example would be Roosevelt’s New Deal. There was a sense, when Roosevelt came in, of we just have to try stuff. Just relying on the market wasn’t going to work. The New Deal was less about ideology; it was more about let’s see what works.
We’re in another one of these periods. We have a storm of oncoming changes, from climate change to fiscal meltdown. And we’re in this policy vacuum. The policies of the past just haven’t worked. We need a time of fresh thinking and openness to new ideas. But I kind of worry about the notion of a “blueprint.” We’re in a period of such rapid and large-scale change that we need to be flexible.
It’s sort of generational. I think maybe we need a new generation to take over. All the polls and evidence tell us that the new genera- tions are much less ideological, much more pragmatic, much more tech savvy. One exam- ple would be attitudes toward gays. In the 1990s, Clinton was “Don’t Ask, Don’t Tell,” and that was seen as a major step forward. And nowadays, you do polls, and young people just don’t get what the older generation was so hung up about.
I think we could very well be in that generational switch. Some of those old debates are no longer debates, because there’s a new generation.

Interview with Writer's Voice about 'Stress Testing The USA'

As part of Environment Month at Writer’s Voice, a national radio show and podcast featuring author interviews, readings, and reviews, I was interviewed about my recent book 'Stress testing The USA" (Palgrave Macmillan). In the book I use the stress test concept to four major events the United States experienced at the start of the 21st century: the invasion of Iraq, the financial meltdown, Hurricane Katrina and the BP oil spill.

The interview was scheduled to air on Writer’s Voice broadcast stations across the country throughout the week of April 7. 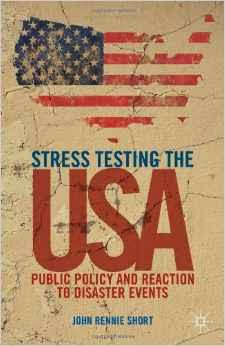 To listen to the full interview on Writer’s Voice, click here http://www.writersvoice.net/2014/04/john-rennie-short-stress-testing-the-usa-john-michael-greer-green-wizardry/

Posted by John Rennie Short at 8:33 AM

I publish papers in a range of academic journals. One publisher allows me to send free eprints. If you want  a free eprint click on the appropriate link.


Population Change in U.S. Cities: Estimating and Explaining the Extent of Decline and Level of Resurgence
http://www.tandfonline.com/eprint/vd74tcnMvehtZJv9i8QP/full

Flânerie and the globalizing city
http://www.tandfonline.com/eprint/MQsckd9UtyMnczzy2pYV/full

No Accident: Traffic and Pedestrians in the Modern City
http://www.tandfonline.com/eprint/4Ane6XnvISvD6dm6wUKd/full