The Barack Administration One Year On

It is over a year since I witnessed and celebrated the inauguration of President Barack Obama. I was just one of millions who lined the Mall in the bright sunlight on a bitterly cold day. We were thankful that the US had elected a thoughtful and intelligent candidate, and we looked forward to a change after the debacle of the Bush presidency.

Alas, one year on and the greatest accomplishment of his administration is that he has returned major banks and giant financial institutions to profitability. Compared to the bright skies and high hopes of last January, this January is dark and gloomy. Health care reform is tantalizingly close but still unrealized and increasingly precarious. The war in Afghanistan escalates, Guantanamo Bay prison is still open and the Republicans have just won a stunning victory in Massachusetts. 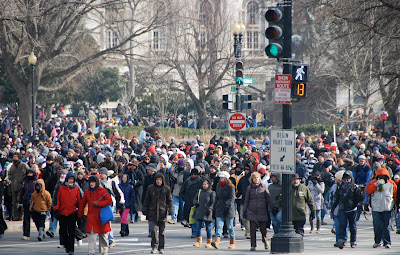 The financial intuitions were bailed out while much needed regulatory reform was slow to gain traction within the Administration. A number of poor choices were made. Geithner was a flawed candidate for Treasury Secretary from the very start. Apart from the issue of his failure to pay taxes—the result of either incompetence or sleaziness, neither of which is a desirable attribute of a cabinet officer—he was always too closely aligned with Wall Street. The New York Fed does not so much regulate Wall Street but shills for it. Geithner was head of the New York Fed before his appointment to Treasury. With a tin ear for popular sentiment, Obama also backed Bernanke for a second term as head of the Fed. The architects of the bailout, which most American saw as flawed and unfair, were rewarded. While stabilization was needed, it should have been paralleled with tough regulatory reform. Yet this reform was never vigorously promoted when it was most obviously needed—last March. Only in the last few days has Obama taken on the banks, belatedly shifting his reliance on advice from Geithner to Volcker. But in the wake of the obscene end-of-the-year bonuses on Wall Street and the dramatic Democratic defeat in the Massachusetts, Obama’s move looks craven and desperate. He should have done this more vigorously much earlier when he could have ridden and guided popular sentiment.

Health care reform has been botched totally. The legislation was never explained to the US public, allowing political enemies easy targets and lots of room for attack. Having to deny “death panels” is not the best way to sell health care reform. The sprawling legislation was never explained nor fully justified by Obama, who allowed the process to meander untended through the swamp that is the US Congress. The Democrats in the Senate took too long, wasted too much time waiting for the support of Senators Snowe and Collins that never materialized and was never going to materialize after the summer assault on the bill by the Republican base. The grubby backroom dealings as Democratic Senators sought to get free rides for their constituents, were shabby and odious and generated even more popular resentment. And while all this was happening, the White House stayed strangely silent.

Barack Obama is a thoughtful person and gifted orator, but on the basis of his first year I am sorry to conclude that he is an incompetent President. In only a year on from a historic victory, he has managed to revitalize and energize an embattled and dispirited Republican Party, alienate independents and deeply disappoint the Democratic base. When you are elected on a popular mandate to change things, and your greatest accomplishment after one year in office is allowing financial institutions to pay out huge bonuses, then the depth of your failure is profound.
Posted by John Rennie Short at 2:26 PM