I visited Warsaw for one week in mid-March. My first day there was wintry. On my last day it felt like spring, encouraging people to shed their heavy coats. Easy to see this experience as a metaphor for Poland’s recent history: the nation emerged from almost fifty years of Communist rule in 1989 as one of the first Eastern bloc countries to escape from the Russian grip. Poland embraced market reforms and joined the EU in 2004.

Warsaw’s Communist legacy is still evident. The Palace of Culture and Science (formerly Joseph Stalin Palace of Culture and Science) was the tallest building in Europe until 1957 and still dominates the skyline in the city center. An exuberant example of Soviet Realism, it was completed in 1955. There are also the blocks of former public housing, modernist monoliths scattered throughout Warsaw. 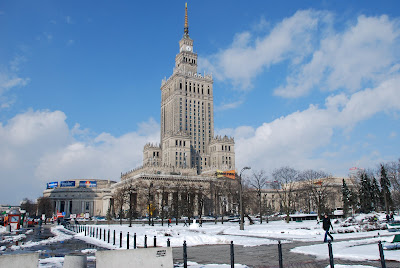 Polish Communism always had to deal with Polish nationalism. The old city reflects the commitment to rebuilding the city after the Nazis nearly annihilated it. Between the end of the Second World War and 1962, old town was carefully recreated from its ruins in an act of architectural memorialization that embodied Polish resilience and Polish identity. The many marvelous examples of Baroque and Neoclassical architecture remind us of Warsaw’s long connection with Europe. 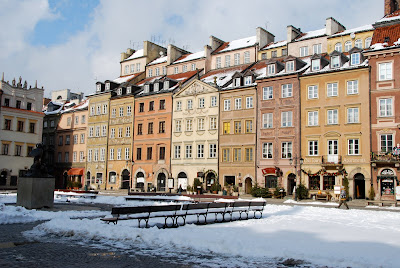 The command economy still lives on in an unclear and uncertain land market. Large blocks of land lie undeveloped and undercapitalized, as investors are unsure of the property rights and legal claims. But there is also tremendous growth, especially at the edges of the city as the interstices between the modernist blocks are filled in with new housing and commerce and retail. One distinct feature is the number of gated communities. Guards and gates mark off many developments in both the central city and in the suburbs.

Like many post-Socialist cities, Warsaw has an infrastructure deficit, a huge housing shortage creating an overpriced housing market, a degraded urban environment in some places with feverish new investments in others. The city is still very Polish, one of the few examples of a European city that over the twentieth century saw it becoming more homogenous. Almost a half million Jews lived in this city prior to 1939. Now there is little more than 15,000. And yet to walk along Nowy Swiat is to see Starbucks and Subway, Colombian coffee houses and Indian restaurants. As I made my way up to the old town, I could see the local fashionistas sporting the ‘new black’ of purple scarves and coats. Cellphone usage is endemic and universal. Poland has such a poor landline network that consumers jumped more quickly to cellphone usage than in the USA. EU funding projects are ubiquitous throughout the city— refurbishing seventeenth-century palaces to providing school playgrounds. 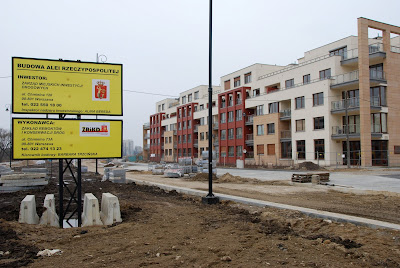 In the city and the country as a whole there is realization that a post-Socialist city does not necessarily mean a neo-liberal city. Warsaw is in Mitteleuropa—situated between East and West Europe. It also occupies the difficult space between command and market economies, socialist and capitalist ideologies, authoritarian and democratic systems of government, of becoming as well as being.