East and West: Twenty Years On

Germany. 9 November. Twenty years ago to the day, the Cold War began its final decline with the toppling of the Berlin Wall. I have spent the day in a unified Germany. I crossed the now historical border between East and West when I left Weimar by train very early this morning to arrive at Frankfurt. I arrived last week for a conference about the legacy of the Bauhaus for the contemporary city. 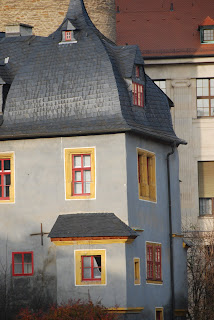 Weimar is at the historical center of German culture. The home of Cranach, Goethe, Schiller and Herder. The town is filled with memories of classic German culture as well fragments of the modern movement. Goethe’s house is a site of pilgrimage. The historic Haus am Horn built in 1923 stands as one of the very earliest examples of modernist domestic architecture. The modern soon turned into the dark and savage. From the Bauhaus studios where Kandinsky, Klee and Moholy-Nagy taught and argued you can see the tall gray memorial tower on the site of Buchenwald concentration camp. A visit was distressing and incomprehensible.

For the past few days the newspapers and television are full of images of the wall falling twenty years ago. East Germans streamed across in their thousands, people started to party and spontaneously chip away with hammers and picks at the symbol of oppression. The integration between East and West is still an ongoing process. Unemployment is still twice as high in the East as in the West. A solidarity tax is still leveled on all citizens to bring the East up to the standard of the West. The legacy of disparity in investment is evident in the newer roofs in the villages and towns of the old West compared to the old East with its abandoned factories and depopulating towns. But there are also signs of a smoothing out. Weimar, formerly in the East, now boasts lots of new buildings and the whole historic center was spiffed up for its designation in 1999 as European Capital of Culture. With more rich elderly West Germans moving in, it is becoming an affluent retirement town. 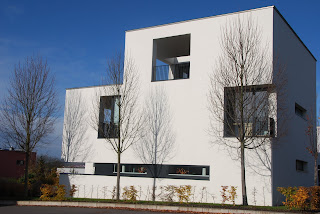 I spoke with some people who had lived in East Germany. They remember the polluted smell of coal-fired power stations, the lack of goods and the restricted freedoms. But the memories are disappearing from view. Ex-Stasi (secret political police) members are now running for office asking voters to put the past behind them. Early this morning I asked my taxi driver if he could remember the great day twenty years ago. No, he said, I was only five. A new generation is coming of age that only knows one Germany. As the momentous day fades into historical memory we will forget the seeming solidity of what was before.
Posted by John Rennie Short at 5:53 PM