To say that Istanbul is situated between East and West is not a trite cliché, but a simple statement of geographical reality. The city sprawls across the narrow sea passage between Europe and Asia.

Like all maritime cities—it fringes not only the Bosporus, but also the Golden Horn and the evocatively named Sea of Marmara—it has an expansive luminosity, a salt-tinged clarity and sea-breezed airiness. Even with 17 million people and busy traffic, it still manages to shine and sparkle.

The city straddles both continents and embodies the varied and long contacts between East and West. Founded in 330 by the Emperor Constantine as Constantinople, it became the capital of the Byzantine Empire that stretched throughout the Eastern Mediterranean, covering parts of Europe as well as Asia. As an important repository of the legacy of Greek classical thought and a transmission point for the intellectual flowering of Arabic and Persian scholarship, Constantinople stayed lit when Western Europe sank into the dark ages. The Byzantines kept the sparks of culture alive that subsequently caught fire in the Renaissance of Western Europe. There were also more destructive exchanges. The city was pillaged in the Fourth Crusade, its treasures looted and taken back to Western Europe. The churches of Venice are filled with the theft.

When it became the capital of the Ottomans, it was the centre of an empire that embraced the continents of Africa, Asia and Europe. At its furthest extent, the city’s power reached to the very gates of Venice. Under the longest reigning Sultan, Suleiman the Magnificent (r. 1520-1566), not only was the empire extended, but also the city was adorned with new mosques and multicultural tolerance was practiced. The city is still filled with the most beautiful of religious architecture including the intimate Church of St. Savior in Chora, the serene Hagia Sophia and the stunning Blue Mosque. The city skyline as it stretches across the hills is punctuated with minarets ands towers, Ottoman mosques and Byzantine churches.

The names Byzantine and Ottoman cover processes rather than fixed objects. The Byzantine Christians grafted their religion onto pagan roots, and their later art reflected contact with the East as well as encounters with the West. The icons produced in the later Byzantine Empire have a more naturalistic representation, reflecting contact with the art of the Western Renaissance. Constantinople/Istanbul was a city where Arabic and Turkish, as well as Greek and Italian, could be heard in the streets. As the Ottoman Empire waned, there was a growing admiration for an ascending West. In 1856, the Sultan abandoned the Topkapi Palace for a new Neoclassical palace at Dolmabahce, which could look just as at home on the banks of the Seine or the Thames as it does on the Bosporus. The encounters continue. Today the Grand Bazaar first founded when the Ottomans gained control of the city in 1453, is filled more by foreign tourists than native Turks. 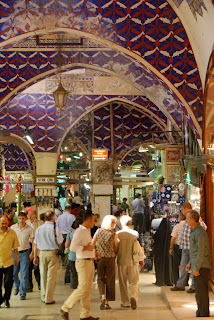 Istanbul is less a fixture and more an ongoing process, a crucible where East and West are reshaped. Turkey is a longstanding, vital member of NATO and continues to forge further links with the West. Its application to join the European Union is just one of many ventures reaching to the West. There is also a more recent religiosity that derives from the Islamic world. To walk the streets of Istanbul is to see women dressed in the most contemporary fashions as well as in the hijab. Islamic fundamentalism today is more an invented tradition of relatively recent vintage than a “pure” historical artifact. And a secular capitalist democracy is not an objective fixed in the future but part of an evolving present. The fundamentalist and the secular represent not the past and the future, respectively, but alternative conceptions of the present: Istanbul’s geographical reality stages these competing modernities in the form of tension between the comfort of an invented past and the attraction of an imagined future. Founded as a secular republic, modern Turkey is still situating between East and West, and at the heart of this unfolding drama is the city of Istanbul. 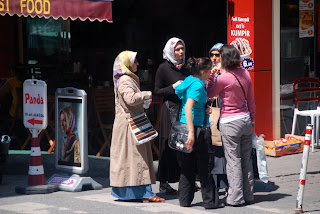