This summer’s guilty pleasure is watching and reading about the phone hacking scandal rocking the British establishment. The story reveals a world of dodgy policemen, powerful press barons wielding huge power and pliant politicians overeager not to offend the press. The revelation of the heartless hacking of a murdered girl’s phone allowed public revulsion to turn into public scrutiny of the tight nexus of interest between press, politicians and police.

The scrutiny reveals a world of overlapping connections: prime ministers very friendly with senior News Corporation executives; the revolving door between working for the press, politicians and police; senior police officials investigating a news agency then when finding nothing wrong going to work for that agency; and a press willing to pay corrupt police for tips offs and information. It is all so cozy and tight with little gap between the police, the press and politics. The boundaries between these institutions are porous. The different institutions feed off each other.

In Georgian England the ruling elite were known as the "ton". Over three hundred influential families owned and ran the country. Things have changed. The traditional landowners no longer set the tone of fashion or establish the beat of politics. But things have not changed. There is still a small group of people with overlapping ties, connections and friendships that own and run the country. Democracy is a thin veneer over this arrangement. While the members of the ton have changed, the ton itself remains, its resilience aided by the concentration of power and influence in just one city. Whereas political and economic power in the US is spread across cities such as Washington, New York and Chicago and states such as Texas and California, Britain is essentially one giant urban region centered on London.

Britain can be summarized as “London and the rest”. The city and its extended metropolitan area squat over the nation just like a Third World primate city. The wealthy, the influential, the movers and shakers live in the city; it is home to Royalty, the political elites, those who manufacture the dominant forms of representation and those who control much of the making and moving of money. It is in this small shared space that the elite move and interact. The public scrutiny of scandals reveals the overlaps, the connections and the tightness of it all. The speed of the scandal and the knock-on effects as senior police resign and powerful executives are arrested, is a function of the small shared space in which these elites operate and interact.

The term ton arose from the phrase le bon ton, in the fashionable mode. Perhaps we need a new phrase to refer to the contemporary elites occupancy of the same shared space. Suggestions please. The agglomeration and concentration of national power by a small minority in one city is more reminiscent of an empire than democracy. But then Britain is still more of a crumbling empire, firmly anchored in central London, than a resurgent national democracy.
Posted by John Rennie Short at 9:30 AM

The daylight was never ending. The sun set after 10 pm in the evening and rose again before 4 am. And in between it was not so much dark as a penumbral light grey. I was in the Baltic during the summer solstice.
The journey began with a flight from Washington to Amsterdam. I always try to fly KLM/ Air France. I made the mistake one time of flying across the Atlantic on United. Big mistake. The food is crappy, no free alcohol and the video system was state of the art in the last century. Long air trips are stressful enough without the mediocre service and shabby décor that United provide for their transatlantic customers. 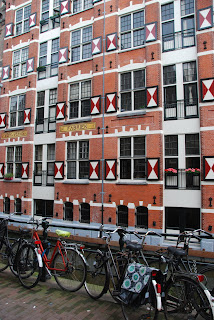 Amsterdam is one of the most accessible cities. The central area is a living legacy from the seventeenth century golden age when the city was the hub of a vast mercantile empire that stretched across the globe. My cruise started from the very place where once ships arrived laden with spices from the Far East and furs from the North American interior.

The first stop was Rostock, a beautiful Hanseatic League city with many of its medieval churches and most of its walls still intact. Sitting at an outside café table sipping coffee, eating a rich German cake and looking at the people in the market place reminded me again of how much I miss living in a European city. I live in the banality of the US suburbs where accessibility is purchased at the expense of lively public spaces where you can simply sit and watch. 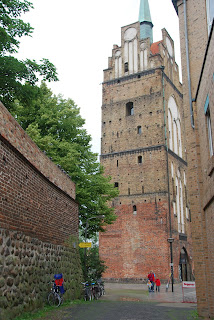 
Stockholm was a bit of a bust. It rained the entire day, sheets of grey rain clouding the city and undermining plans to walk the streets of the old town, Gamla Stan. Spent most of the day at the Museum of Modern Art. The Swedes have that easy embrace of modernity that makes their public spaces so smoothly elegant.

Wandered around the medieval city of Tallinn. With its finely textured urban form and beautifully colored buildings, it is an urbanist’s delight. 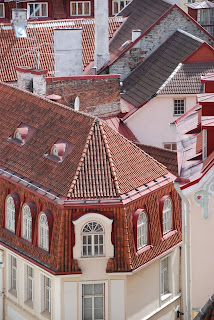 A day in Helsinki where I visited the railway station designed by Eliel Saarinen, father of Eero, and wandered around the inner city dominated by gorgeous art noveau buildings. Then a day in Copenhagen–if its Saturday it must be Denmark– where I wandered down the pedestrian streets and visited the National Museum and then the modern extension to the National Library. 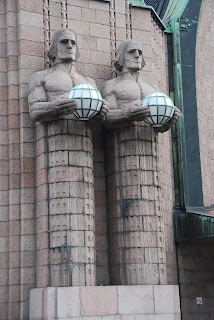 Flew back to DC and completed the US-Scandinavian modernist encounter and experience by arriving at the terminal designed by Eero Saarinen.

As my memory quickly edits out all the petty annoyances of the trip I only recall the joyful experience of the walkability and sociability of the Northern cities where public space and the civic realm are respected and treasured.